Multi-epoch photometric study in H-Alpha and infrared
Back 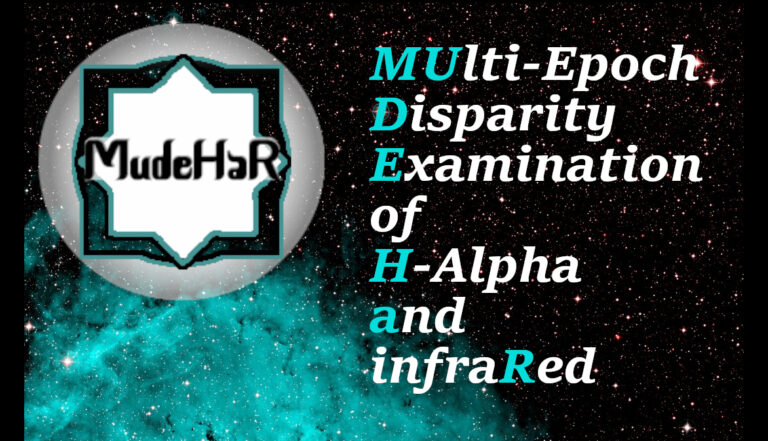 Landing site: in proc. in CEFCA

MUDEHaR [mu-de-har] (MUlti-epoch Disparity Examination of H-Alpha and infraRed) is a multi-epoch photometric survey in Hα and the calcium triplet window that uses T80Cam at the JAST80 telescope at Javalambre. It will obtain 100 epochs per field for 20 fields in the Galactic disk, each of two square degrees, for a total of 40 square degrees. Its main goal is to detect tens of thousands of variable Hα stars on a days-months-years scale, including massive stars with a magnetic field, pulsating stars, active M stars, and other types of variable stars.

MUDEHaR’s defining and unique characteristics are, foremost: the multi-epoch nature; the targeting of areas within the Galactic disk; an extensive dynamic range in magnitudes towards the brightest stars (AB mag 3-17, reaching even substellar masses); and a powerful resolution capability in the sky (0.55 arcsec/pix).

MUDEHaR is focused on stellar clusters and HII regions including bright stars, with the main objective of accounting for an unprecedented number of massive OB stars that present emission/variability in Hα, as magnetic stars, Oe and Be, etc. They represent the most compelling objects when trying to understand the star formation of these powerful cosmic engines. In addition, a long list of variable stars in Hα and near-IR will be made available to the scientific community, along unparalleled images to construct a variability Hα map of the northern Galactic plane.

The MUDEHaR current members are mainly from Spanish institutions (CAB CSIC-INTA, and IAA) and the Institute of Astronomy (KU Leuven) in Belgium, and have participated in the design of the observational survey and scientific exploitation of the data. The PI/team behind this project are the same principal investigators responsible for the GALANTE survey in CAB, operated on the same telescope (JAST/T80) in 2016-2021.